My old pilot loved the rain.

Vesper Aurora lifts her head with a start. The low whisper of rain on Kai-34's canopy has lured her to the brink of sleep several times in the past hour. No one seems to be entering or exiting the heavily guarded gate at the bottom of the ravine, so she figures it doesn't matter if she nods off now and again.

"Why? It just turns everything into freezing mud."

She said she loved the way it changed the flavor of the air. Kai-34 sounds wistful, as far as a mech can sound any particular way. I never understood what that meant.

"It does, I guess, yeah. Something about the chemicals that get released when it hits the ground," says Vesper Aurora, tucking her legs up on the seat in the cockpit. It's cold in here. The constant rain makes everything cold. "Where was she from? Your old pilot."

A long moment goes by before Kai-34 answers. Water trickles down the canopy. She was from Orex Nine.

Yes. She thought of rain as a novelty. A rare gift to be treasured, even when it fell every day for weeks.

Vesper Aurora considers that in silence, watching the streaks left behind by the raindrops on the thick glass of Kai-34's cockpit. The trails interlace and diverge like quicksilver, hypnotic. It's beautiful, in a dispassionate way, she supposes, and has just begun to drift off again when a red light flashes on the control panel and a little hatch cover slides back, revealing a hand scanner. Vesper Aurora peels off a glove and presses her cold palm to the screen. The red light turns green, there's a pneumatic sound, and warm air fills the cockpit. Vesper Aurora smiles. "Thanks."

[ADVANCED FUNCTIONS UNAVAILABLE] is a narrative game for 2 players, a mech and a pilot. All but the most basic of the mech's systems are bio-locked to the signature of their previous pilot, who is now dead. Before the final battle, the new pilot must earn the mech's trust, and access to the locked systems, by talking to the mech about the dead pilot.

played this week and loved it! told a really fascinating story, started very bright eyed & bushy tailed but got into a lot of political stuff like a good mech/war story does.

My only complaint is both turns focus just on the mech, whether they're being asked a question or telling a story, there isn't any on the new pilot, so we tweaked it that on the mech's turn, they aspire to learn more about the new pilot's motivation. in addition to exploring the mech's grief through the new pilot's eyes, you now also  get to witness how the loss of their old pilot will affect the mech's relationship with people going forward and made for a more balanced experience for two players.

omg thank you so much for this super helpful and insightful comment! you're totally right - the mech should have the opportunity to question the pilot as well. i will make an update in the rules as soon as i have time!

Had a wonderful evening playing this with a friend. It was honestly magical how each scene bled into each other seamlessly through improv,  with no planning, going solely off of dice rolls to select scenes.  We both cried at the end of the evening. A super meaningful way to pass an hour or so! Thanks for the accessible and super fun game! :)

im yelling, this is the sweetest comment ever. so glad u enjoyed, and very glad to hear the flow was good! thank u so much for playing! 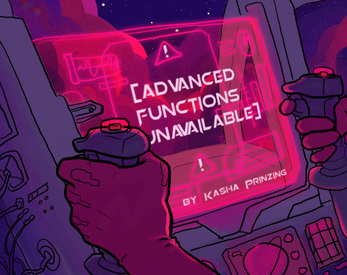